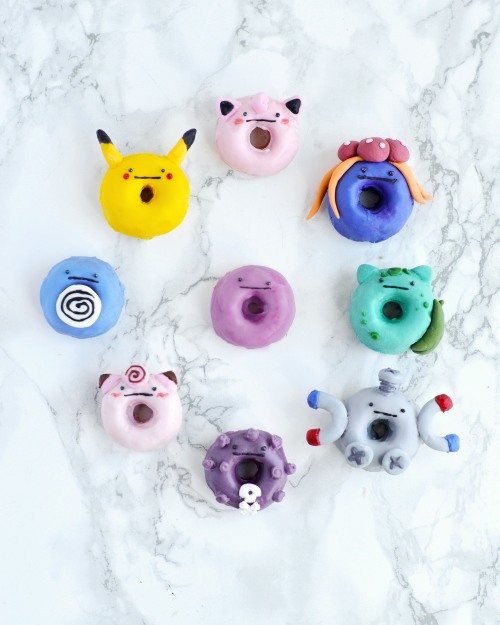 I remember holding a Gameboy Color in my hands for the first time. My brother had bought it with months of saving up for it and I couldn’t believe the handheld color display. Along with the Gameboy he purchased Pokémon Red, which was just starting to get its hype. I loved that game and spent hours leveling up Pokémon and discovering glitches like the MissingNo.. This glitch let you duplicate rare candies infinitely which you then used to up your team to level 99. Honestly, leveling up your team so high is useless because you can beat the whole game with much less, but bragging rights seem to never go out of fashion. And while Pokémon Red has a special place in my heart, Pokemon Silver has to be the best one out there. (Don’t @ me, please.)

I’ve made Star Wars doughnuts in the past, so I thought it’d be fun to do a Pokémon version. Only this time I decided to make them into Ditto versions. If you didn’t know, Ditto is a Pokémon that copies the abilities and appearances of other Pokémon except for their face.  I guess this was a way of keeping the same simple face while making fun appendages. But honestly, I think they’re very cute in their own right. Just look at all the plushies that are made of them! 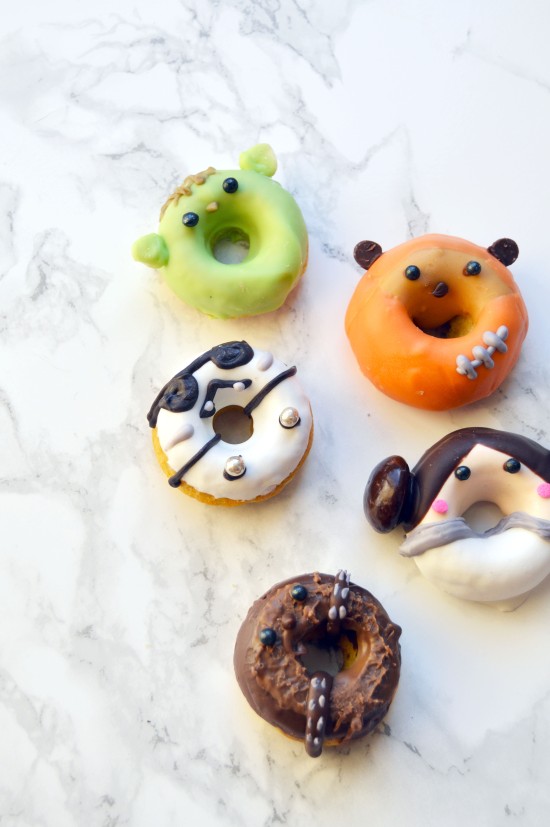 The other day I was watching my favorite movie of all time, “When Harry Met Sally” but something was off about it. I couldn’t put my finger on what it was that was bothering me until I realized it was Billy Crystal’s voice. Billy Crystal who is a main character in the movie, also voices Mike Wazowski from “Monsters Inc.”. Every time he spoke, all I could see was the short, green one-eyed monster in my head. It’s still my favorite movie; it just isn’t the same as before. 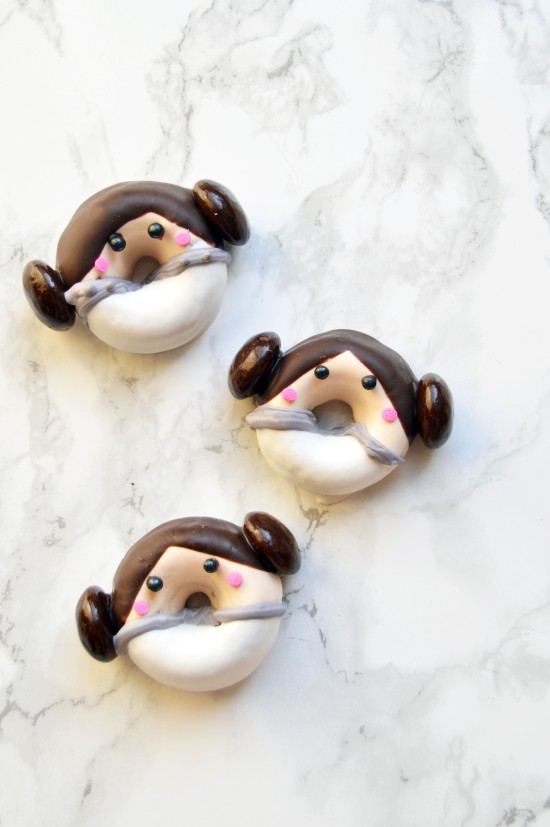 It’s taken forever to edit and finish the second part of the SW doughnut series. You would think editing a few photos and putting it together would be a cinch. But editing each step took a lot longer than I thought. 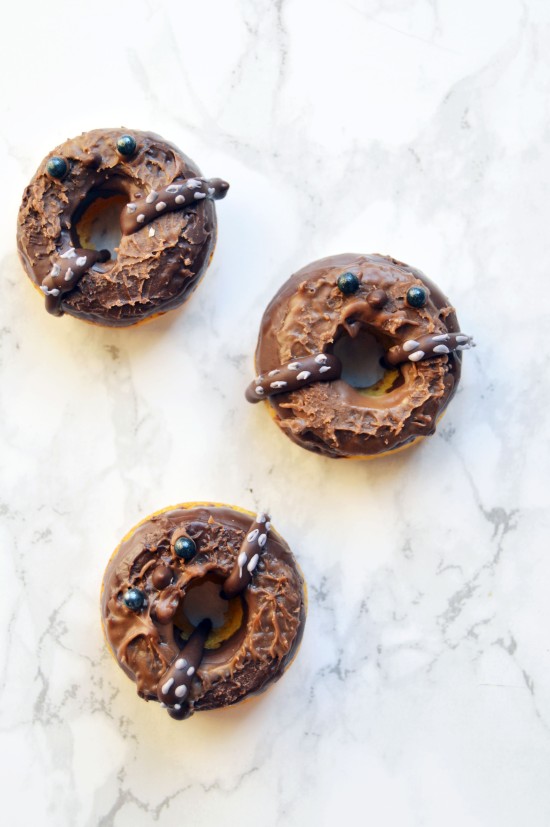 So far,  It’s been a busy weekend with baking this and that. I can’t wait to share the next cake with you! I hope to have it on here before the end of the week. ❤ 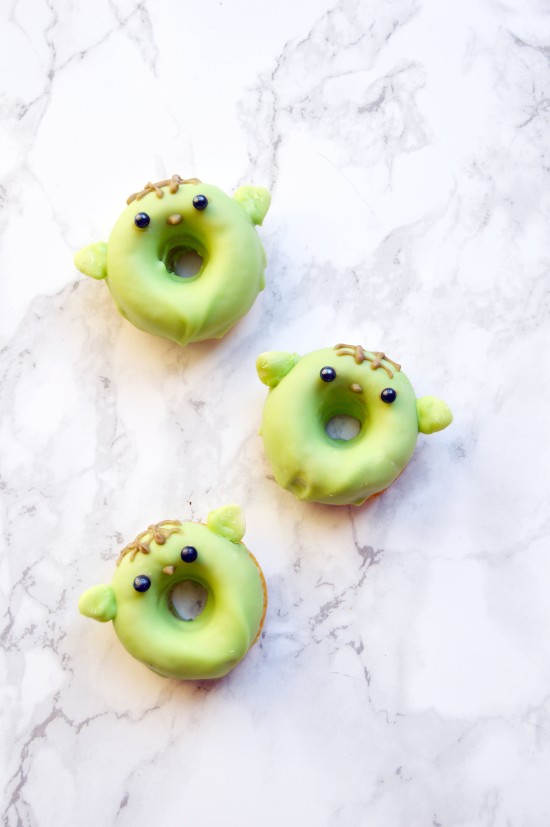 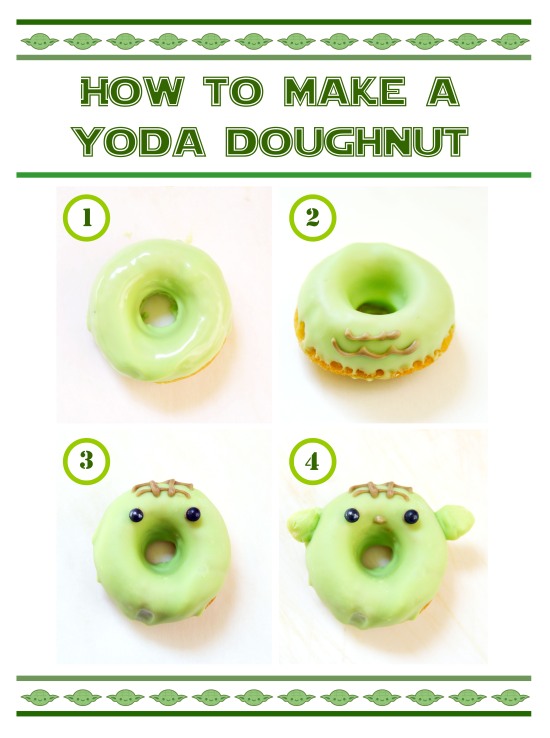 For the Leia Doughnuts:

For the Yoda Doughnuts:

For the Chewbacca Doughnuts: 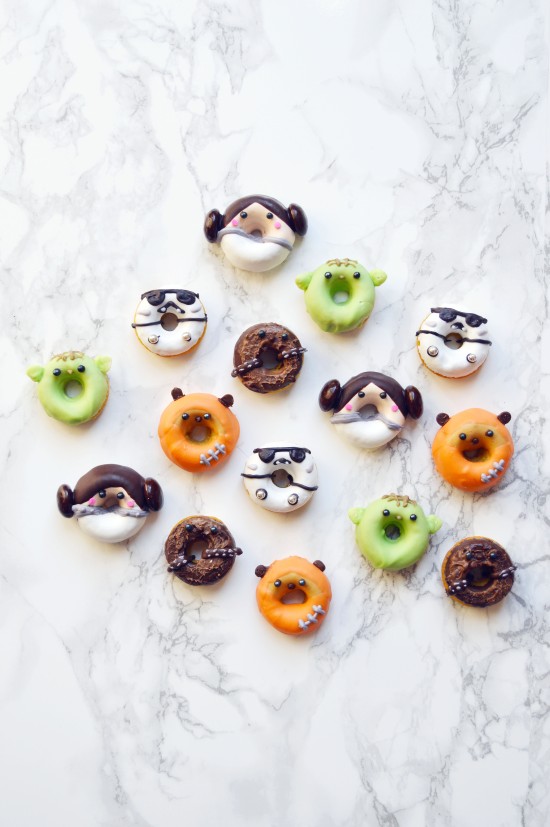 Well it’s here, Star Wars Day! Every year I try to make some sort of Star Wars themed food to celebrate Star Wars Day. In case you didn’t know, it’s on May 4th because it plays on the phrase, “May the force be with you”. Get it? Like “May the Fourth be with you?” What I love the most about Star Wars is how it is intergenerational and timeless. Plus, there are so many characters and worlds that it’s hard to become bored with the series. 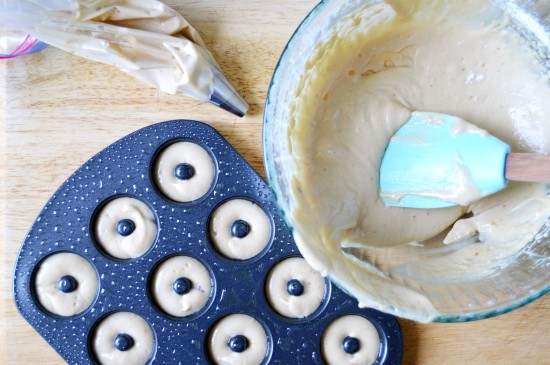 After talking about hybrid food that involves doughnuts in my last post, I could not get them out of my head. But of course I couldn’t just make regular doughnuts; I had to try my hand at decorating doughnuts. To make them even cuter, I went down a size to mini doughnuts. It was tough to figure out which characters to do because there are so many to choose from, but I decided to go with the classics: Yoda, Princess Leia, Chewbacca, Stormtroopers and Ewoks. 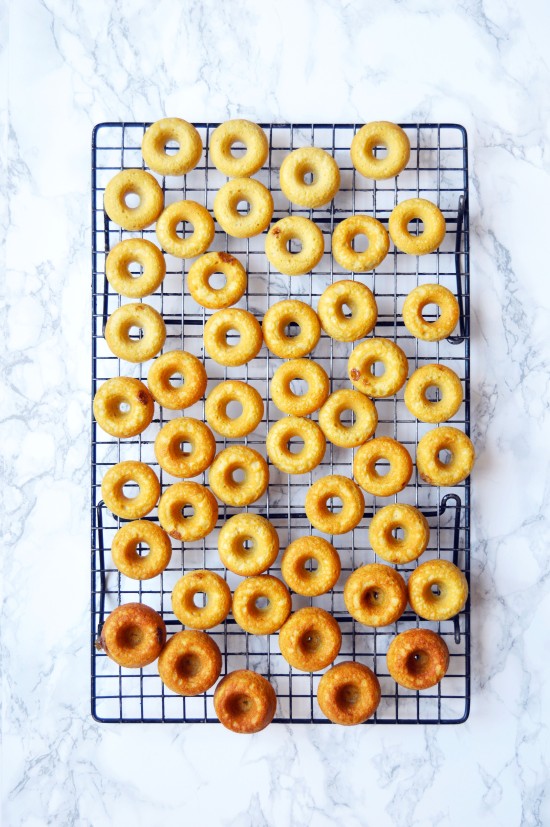 I think if the doughnuts were bigger, it would’ve been easier to do the details but since they were tiny, it was pretty time consuming to do everything. I was working with teeny tiny holes in my piping bag that kept clogging up with chocolate that hardened too quickly and tiny black pearl eyes that wouldn’t stay on the faces. And because they have more detail than I originally expected, I’m breaking up the post into two parts: a how to of Stormtroopers and Ewoks on this one, and Princess Leia, Yoda and Chewbacca on the next one. 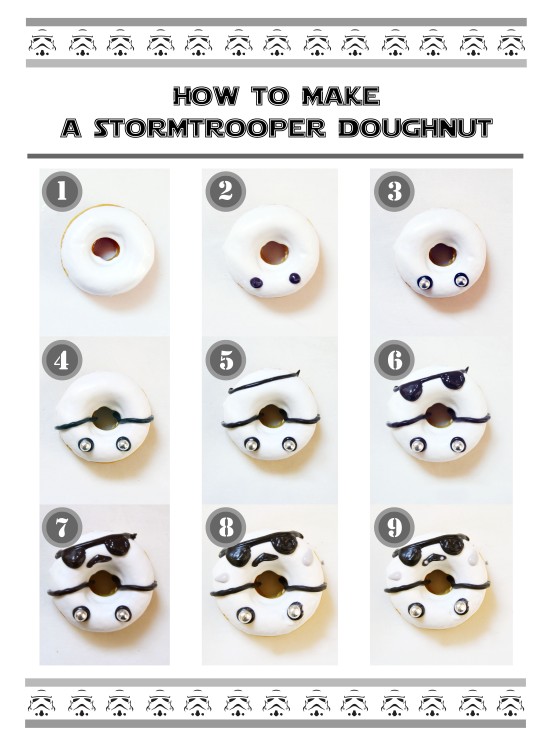 The doughnut recipe I used tastes like a classic old fashioned doughnut thanks to the ground nutmeg. Fresh ground nutmeg is key here. As someone who is guilty of buying a whole jar of spice for one recipe and then never touching it again for years, I highly recommend you buy the nutmeg whole since it will last you pretty much forever (as long as you keep it in a cool, dry place). 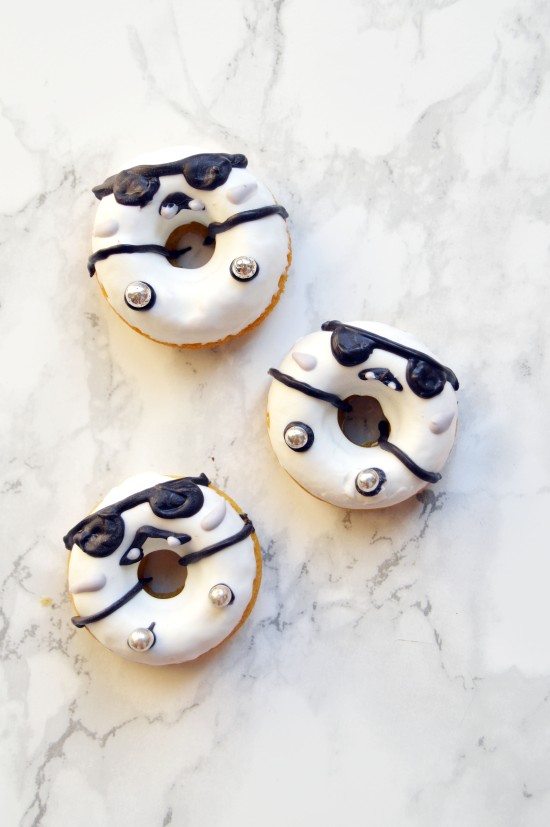 The recipe I used will make a small batch, so small that you can use a simple hand held mixer for it. Oh, and remember not to overfill your pan or your doughnut will not look like a doughnut. It will look more like a tiny bunt cake. Once they’re covered in chocolate, they taste like the highly addictive Pop’ems. They’re addictive and so easy to eat, it’s a little dangerous.

Disposable piping bags and plastic cups are your best friends for this project, especially if you plan on tackling more than two characters in one time. Melted chocolate is so annoying to clean off, it’s just not worth the pain if you have to wash off more than 6 colors worth of bowls. The part of me that cares about the environment did cry a little, but in the end laziness and convenience won out. 🙂 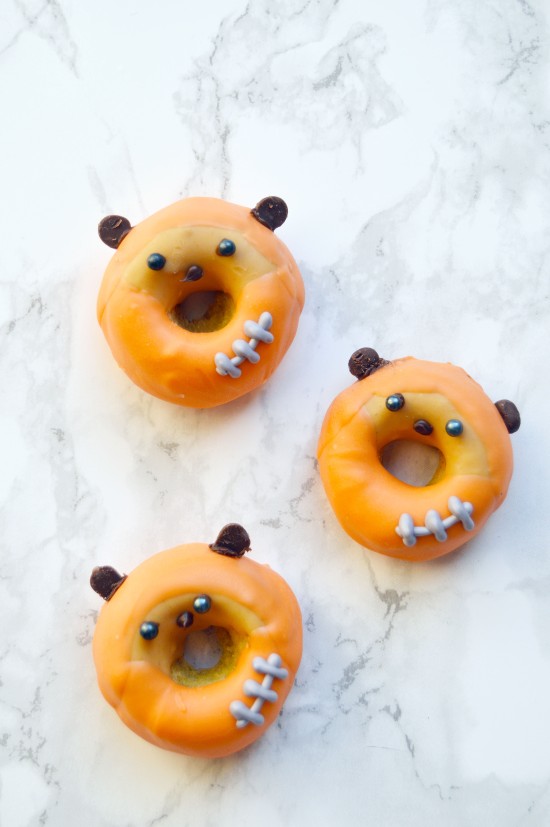 For the Stormtrooper Doughnuts:

For the Ewok Doughnuts: 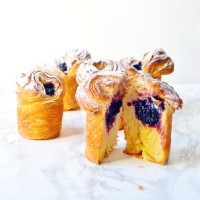 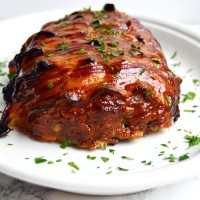 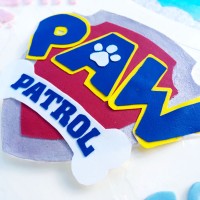 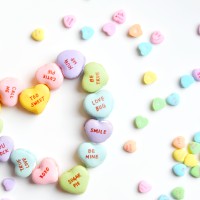 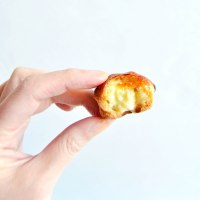 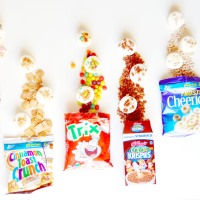